I've had this book on my reading list for a little while now and I got through it in a single sitting yesterday so I thought I'd chuck up a quick review for it. 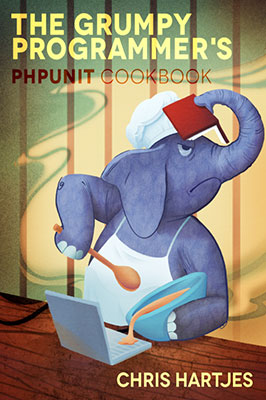 The Grumpy Programmer (actual name Chris Hartjes) amusingly blogs and tweets all things PHP and particularly PHPUnit. When I saw he was publishing this book, I was curious to see how his strident style would stand up to the longer form. Pleasantly, it turns out.

Chris maintains his gruff voice while whirling through the ins and outs of using PHPUnit. I've been using PHPUnit for a long time now and I find that when I am really familiar with a tool, I tend to re/(over)use patterns that have served me well in the past. So while I found I was familiar with much of the material in the book, there are more than a few tidbits here that I picked up. I feel even the most grizzled PHPUnit veteran's testing regime will benefit from a read through.

The book seems aimed at the less experienced which I did find a little surprising given the title. When I think cookbook I tend to think of the weighty O'Reilly tomes. This book though is more like a lengthy tutorial than a cookbook in the O'Reilly style. As a tutorial goes though it excels. It is detailed without being turgid and covers all the major aspects of using PHPUnit that I would expect it to and then some. I found the chapter on Test Doubles (that is mocks, stubs and fakes) to be particularly excellent. The vocabulary surrounding these terms tends to get mixed up and consequently programmers often treat them as the same thing. That leads in my experience, at best, to confusion. And at worst, to poor tests that are difficult to maintain.

As a quick aside, the book is published by LeanPub, who ensure authors receive 90% of the proceeds from their work. I think this is a wonderful initiative. Writing, especially for a programmer is tremendously hard and I like the idea of those that attempt it, and do a good job, get appropriately rewarded for doing so.

So, back to the book. You find peppered throughout the introduction to PHPUnit subtle wisdoms that are hard to argue with. A simple and you would think obvious example, is that of always providing the final argument to assert statements with a description message. This message is displayed when the test fails, helping you quickly identify where the problem lies. Another: writing strictly encapsulated code that eschews static methods and class variables, is (well unsurprisingly) easier to test that code that is constantly mutating global state.

The book is quite short, coming in (at least in my pdf version) at 85 pages. I feel like there is sufficient scope for more content here. Especially for a 'cookbook'. I would have loved to have seen more on using Data Builders for example. The chapter on data providers is great, but I find you often need more fine grained control over your fixtures. Factories and data builders are a couple concepts that once learned, significantly reduce the friction of TDD.

I perhaps would also liked to have seen more in introduction to TDD itself, motivations for it, and perhaps a brief comparison between the two principle TDD xUnit styles. Specifically the Statist TDD and Mockist/London School TDD styles. The former being a test style mainly interested in setting up some state, running a behaviour and checking the end state matches what you expected. The Mockist approach is less interested in observing State and instead is more interested in the messages passed between objects (method calls between collaborators).

Overall I enjoyed the book, and it fills a much needed role in guiding budding PHP TDD practitioners in the use of the most mature tool we have available in PHP. I picked up a few neat new tricks and I suspect many PHP programmers will do the same.

You can buy it now at grumpy-phpunit.com